There is something about a properly groomed and a maintained beard. It gives you a classy look and your confidence is always on point. However, given the numerous beard styles for men, it can be a bit challenging choosing the right one.

When it comes to a great beard there are some tips that you need to have that amazing look. 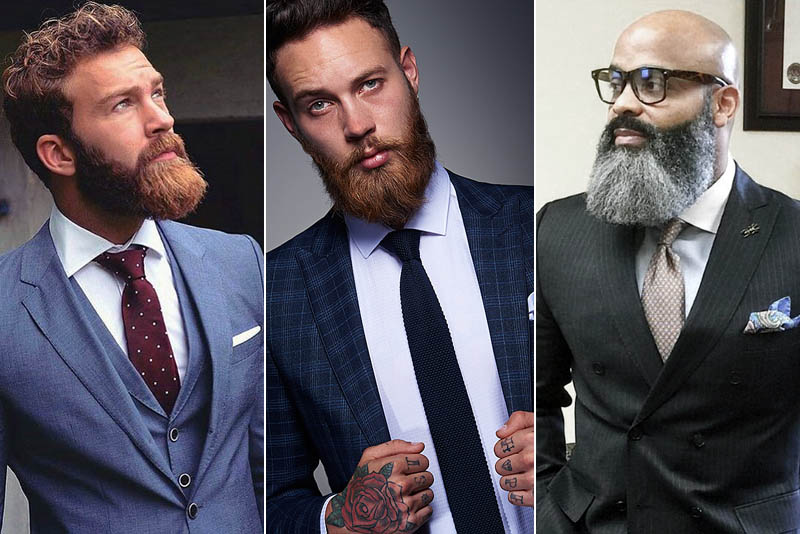 There are different beard styles for men which are covered in this article. This means that your homework has already been done and the only thing that is left for you is to choose the one that fits you best.

This beard will take at least 6 months to grow. After it has fully grown, maintain its length and girth then trim it to your preference level. This gives you a unique look as few people are perfect in keeping it. It needs patiene to grow a long beard. 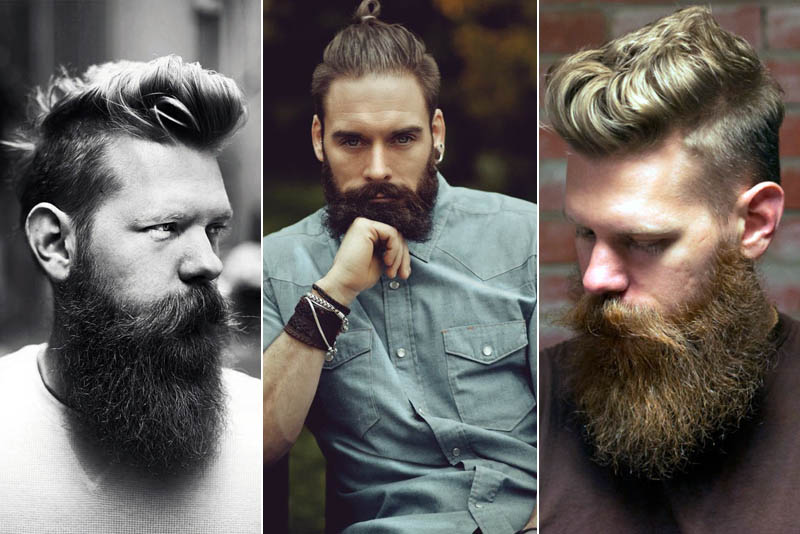 This is a beard style that is perfect for working professional as it is presentable and commands some level of respect. This is because the beard is trimmed to an equal level and it is about two inches long. If you fancy a nice beard this is definitely one of your choices. 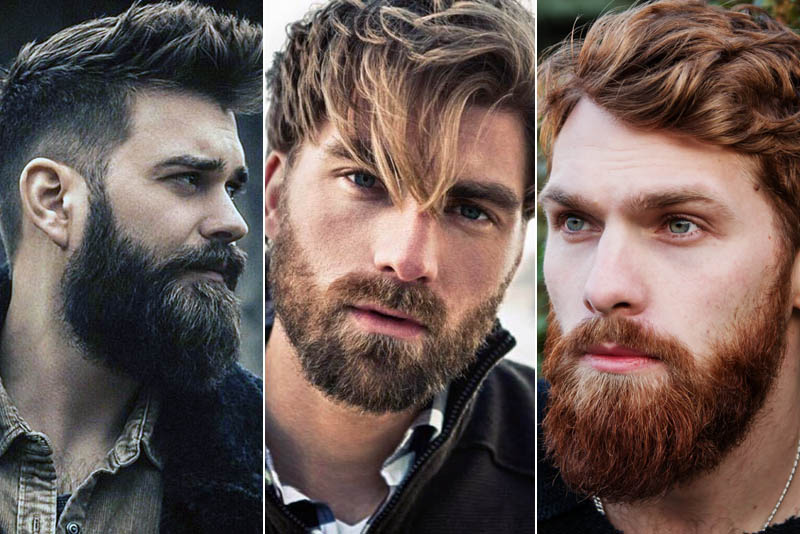 This beard is the real deal for an oval-shaped face. The mustache is trimmed while the beard continues to grow up to the length that you want.

The beard should be left until it stops growing. As it grows you should trim the cheek areas and the mustache. When the growth is completed round it up to get this style. 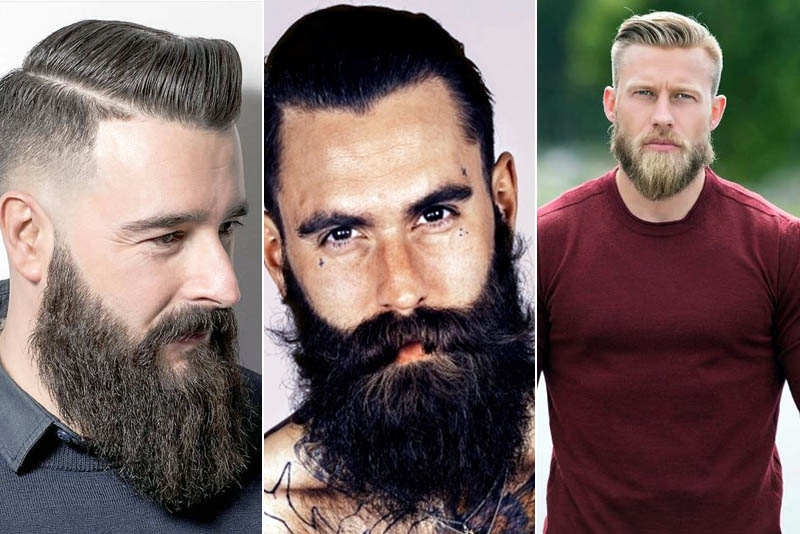 In order to get this beard you should start with faded sideburns as they should grow to a full beard. Trim the burns on the outside.

This is not hard to maintain and should be paired with a good side part on your hair. This makes you achieve your dream look which means that it is very fulfilling.

READ: How to Grow a Beard (Thicker, Fuller, & Faster) – The Ultimate Guide

Black men have different beard styles which go very well with their dark completion. As a result of their complexion, their beard is always black which is an added advantage; and when they grow old it turns grey giving them an amazing look. Notable beard styles for black men include:

This is an awesome beard style that flows with short hair. This gives black men an outstanding look as their beard is this thus the best results. 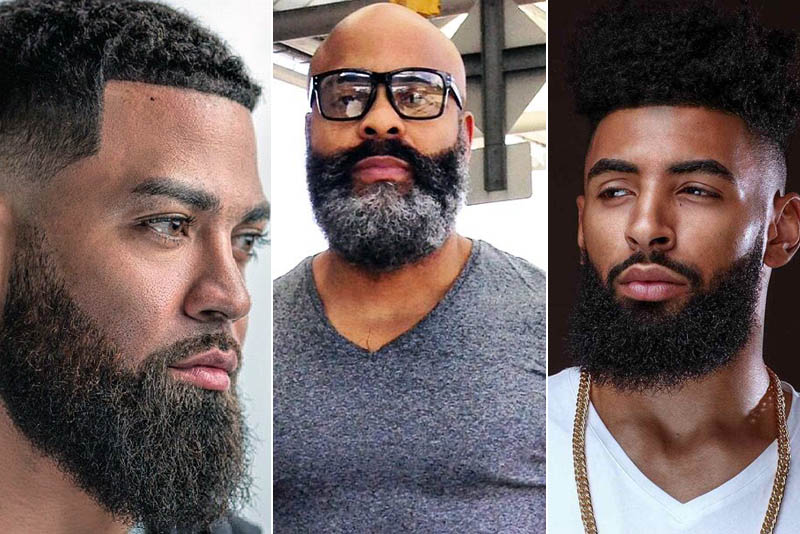 This is a classy look that requires very little effort in maintenance. The hair around the mouth is the emphasis. When it comes to this look, Kanye West rocks with a lot of confidence. 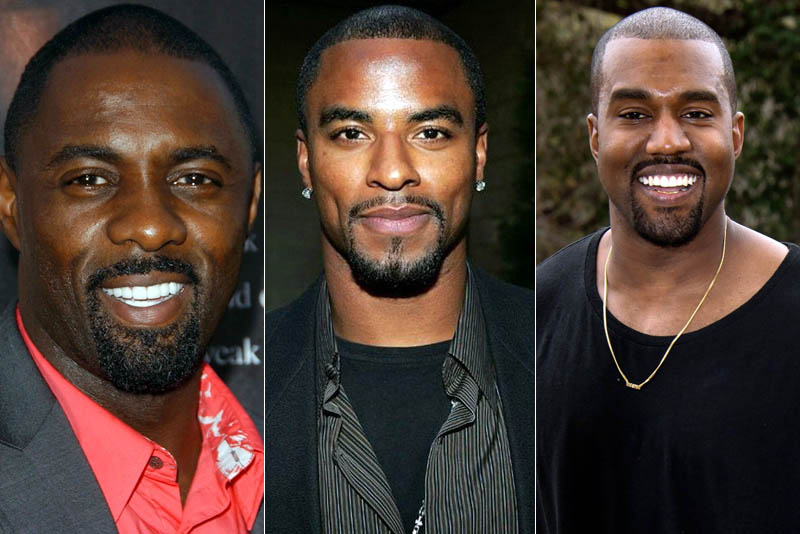 In fact, men with short hair have a variety of beard styles to choose from such as full beard or a short beard.

Short hair blend well with most beard styles which is very encouraging. These include short and tampered beard, short and textures beard, thin beard and chin strap beard.

Also, full beard looks good on men with short hair as we see with Rick Ross and some celebrities. This gives both a bad boy look as well as a classy look which is positive.

Bald and thick is also another startling beard style for men with short hair. 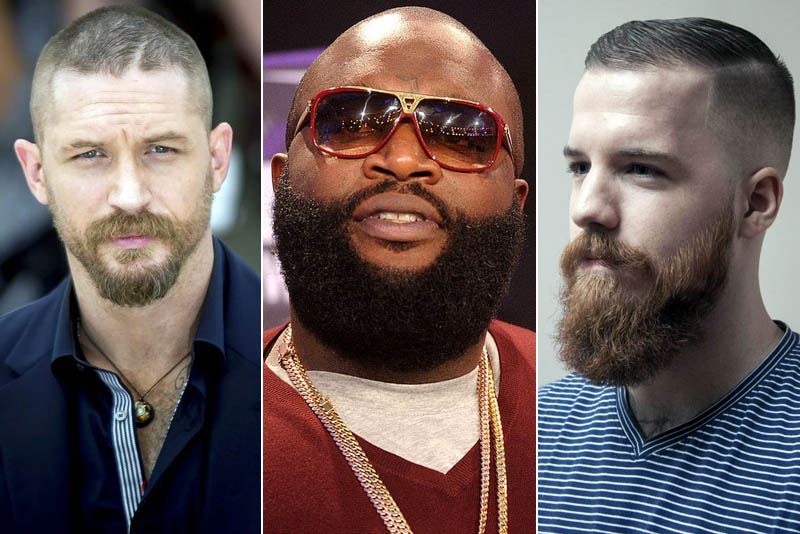 Beard Styles for Men with Round Face

There beard styles can give incredible look based on the shape of the face. For instance, if you’ve got a round face then the following beard styles for men with round face should be considered:

If you’re looking for a charming classy look likened to a gentleman but with wild side, look no further. The polished beard style for men with short hair is very attractive and gives a respectable look.

It’s a full and wild beard that has been trimmed at the sides and the bottom. Thus resulting in a uniform look that is very neat and clean.

Also, maintaining this look is easy – you just need a trimmer and few minutes daily for up keep. 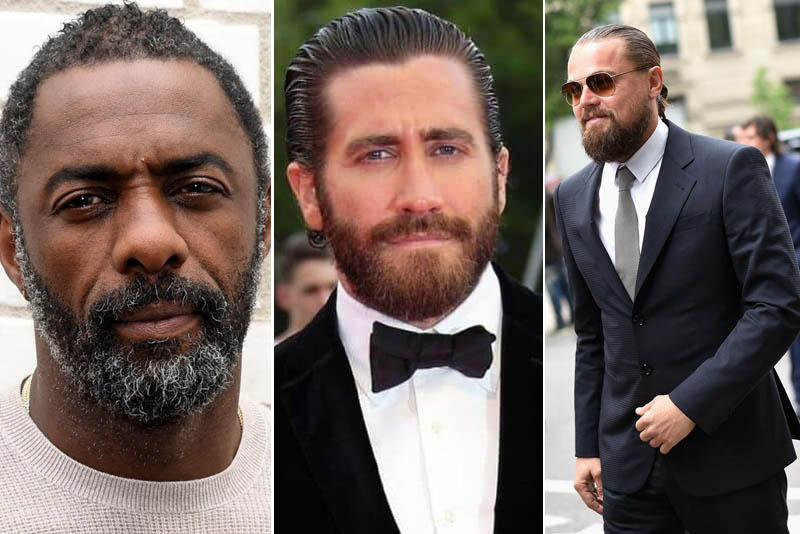 How about the cool look with a hint of respectability? Heck, why not announce to the world that you have arrived with the two tone beard style for men with round face.

If you want to grow this beard style, you have to grow your beard until it forms a pointed shape. Then dye the middle stripe with a different color.

Most importantly, you should not bleach at the roots; and also let the mustache grow.

Not only is this look great for men with round face, it also gives a great look on those with oval face as well. 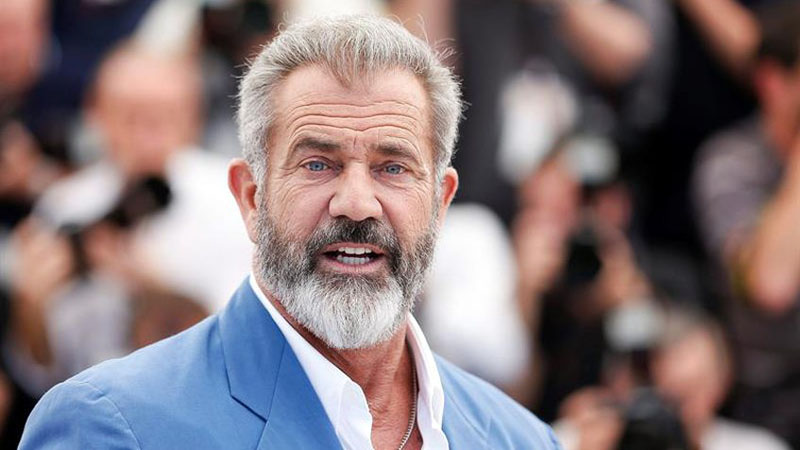 It gives them a very attractive look. Plus the added advantage of not having to trim their head hair into different styles.

Stubble is one of the best beard styles for bald men. It is easy to maintain; and also it gives you a great bad boy look. 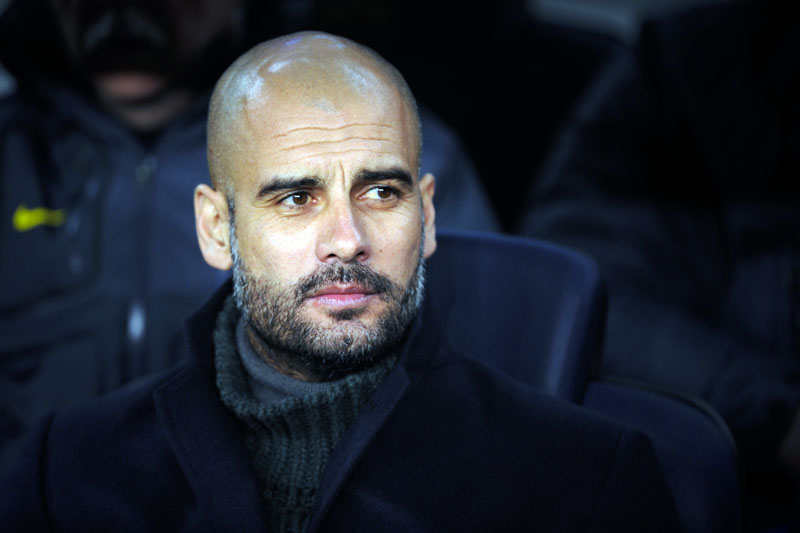 Any full beard is always a fantastic pick. It also fits well with the most outfit, whether it is a casual look or an official look.

This gives you a look that commands respect and also exposes your interesting side. 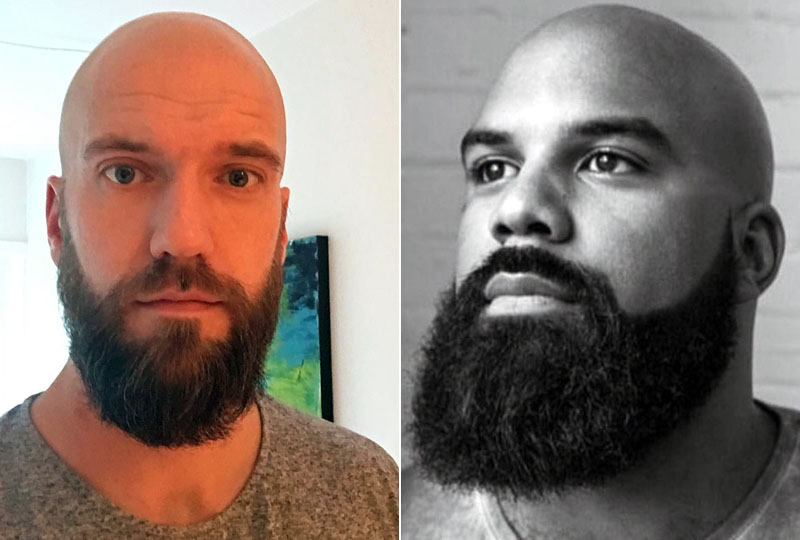 Older men are always seen as a source of wisdom given their maturity and life experiences. There some beard styles for older men that can compliment this aura, such as:

This is a short beard that’s fit all occasions. It goes well with short hair. To achieve this style, trim the sideburns and also the beard to almost the same level.

The edges should not be defined and should be trimmed to be rough but visible.

The mustache should also grow to the same length and get connected to the beard at the corner of the mouth. 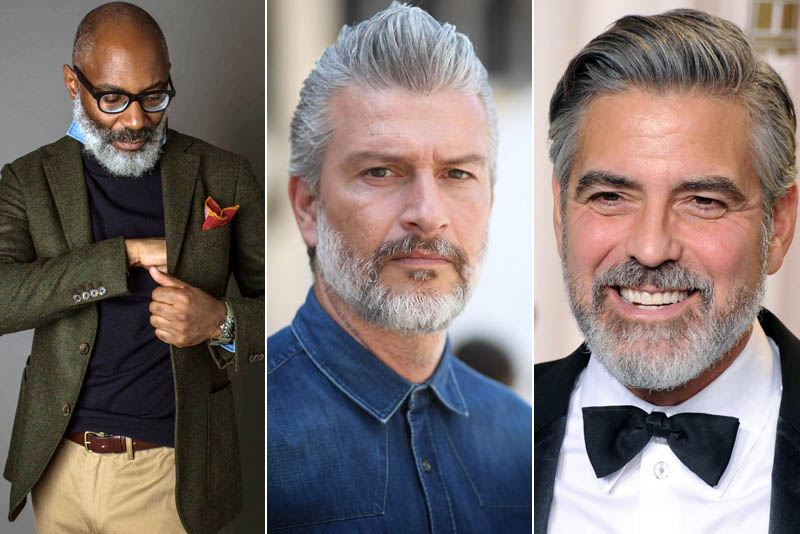 It is one of the shortest beards and the best for faded hair.

The sideburns should be thin and edges should be kept sharp and defined by a slight curve. The mustache should also be closely cut. 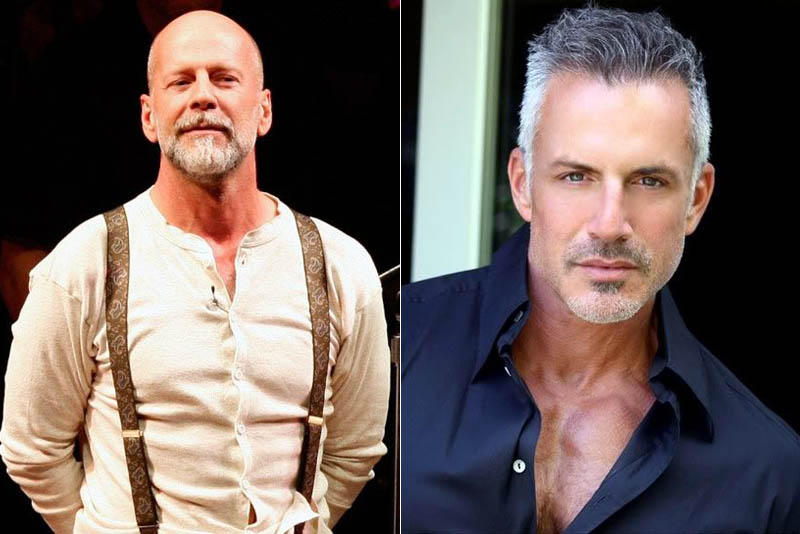 Young men desire a great sense of fashion. Some if not most want to rock the hair and beard styles that are attractive to the opposite sex.

Having one of the best beard styles for young men is definitely one way of being trendy and simply awesome. Also, it creates a wonderful impression whenever you meet new people in your day-to-day activities.

Here are some appropriate beard styles for young men that will give you the look and grant you the edge.

This is a mind-blowing beard style when done in the right way.

The hair has to be short and trimmed to defined lines at the edges.

The sideburns should be cut so as to not be visible. The mustache should also flow with the beard and the meeting point should be uniform.

The beard should be trimmed to just below the chin and should have a rounded point. 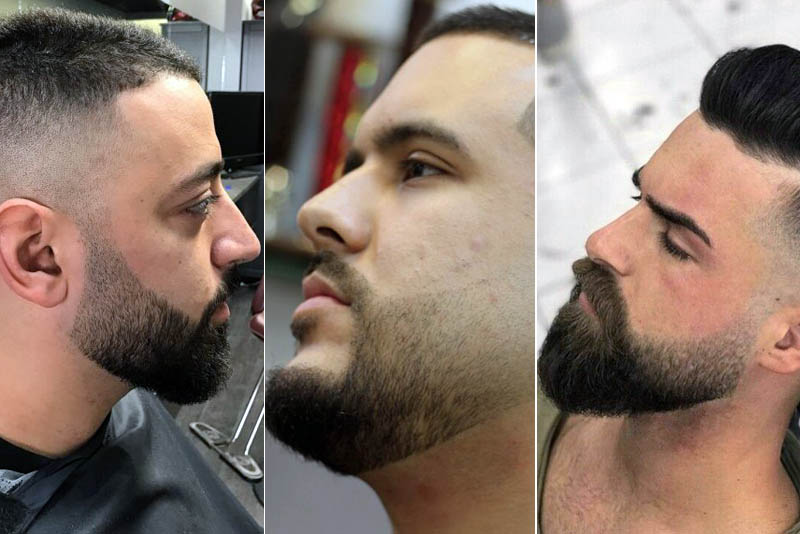 You should also grow a soul patch for a better look.

This is a very great look for the young people as it is very attractive and gives you that magnificent look.

The sideburns should be faded to a thin line that move to your jawline covering the chin. The beard should not extend to the cheeks as it will ruin the look.

Also, you can grow a small soul patch that should be almost invisible for the best results.

This is one of the greatest beard styles for young people as it gives you a very different look. It also suits most outfits. 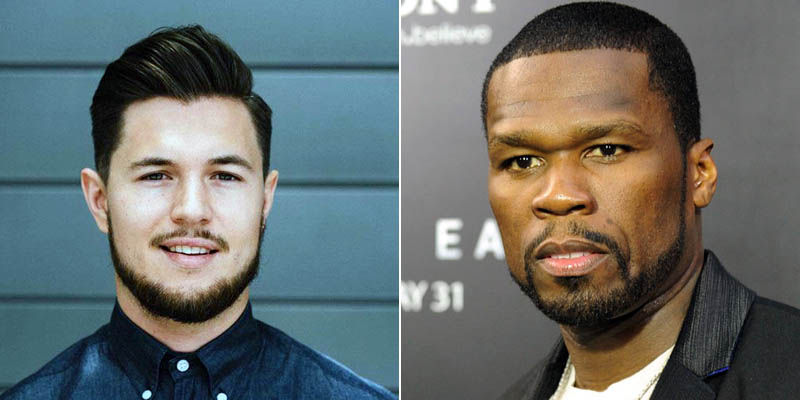 The jaw line (a.k.a “Lines”) works well with fades. The sideburns should be short and the beard should extend.

The edges should be set diagonally downwards and a small soul patch can be grown. The mustache should be trimmed and curved down to almost meeting the beard.

Also, the jaw line needs to be clear by shaving off rough hair with a razor blade.

For stylish young people with a great taste in fashion, this is the best as it gives you an outstanding look. 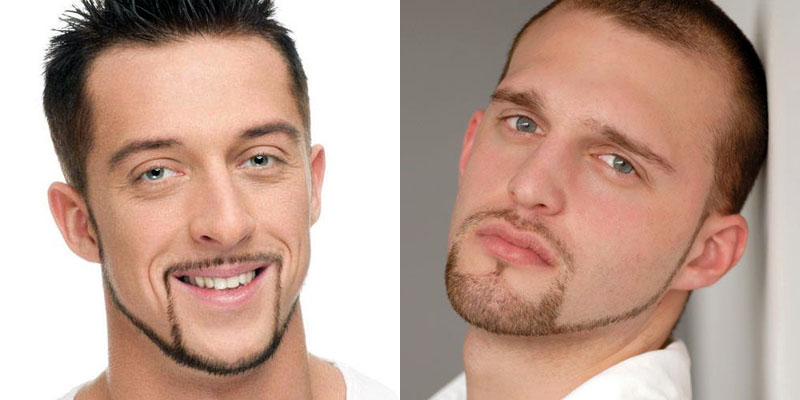 There are several short beard styles for men. This means that the beard should be short and the sideburns should be faded for the best look.

Some style includes but not limited to: Short and Tampered Beard, Bold and Thick Beard, Short and Textured Beard as well as several other styles. Short beard styles give a great presentable look and they are the best for professionals.

Also, they are the best beard style for the students who are in for summer jobs or internship because they give you a focused, humble look which can have a positive impact on how the company sees and assesses you.

If you’re a professional, short beard styles for men give a good impression to your colleagues and/or clients. Thus making you come across as professional and confident. 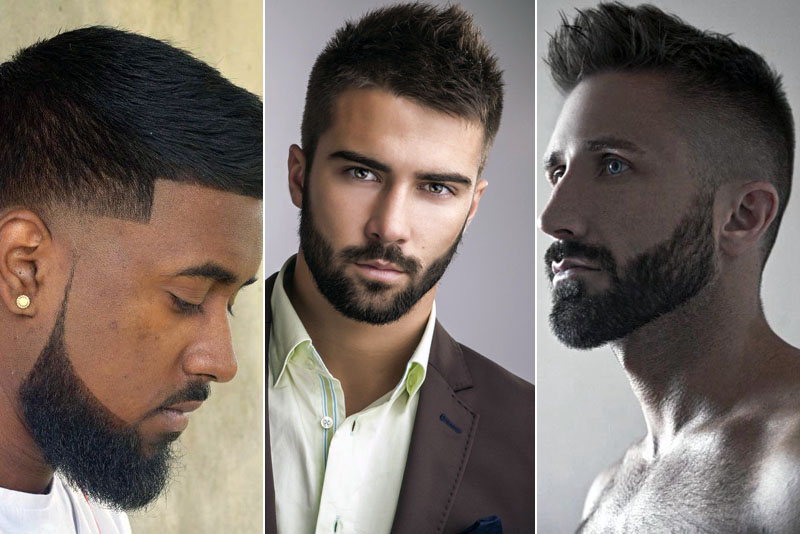 The different beard styles for men is all above having choices and options. There are no set in stone ways or methods for choosing the best beard style for you. It’s all about you and what makes you feel you.

While this guide covers the various best style for man out there, feel free to release yourself, experiment and find a style best suited to you.